Fish farming or aquaculture is one of the fastest-growing food sectors in the world.

Unfortunately, the main ingredients for fish feed for farmed or commercial fish come from unsustainable sources: soybeans, which is a driver of massive deforestation and fishmeal, which destroys the marine ecosystem by the removal of small fish like anchovies, sardines and herring.

To replace these destructive and traditional ingredients, NovFeed, a Tanzanian start-up is providing a sustainable solution for fishmeal by converting organic waste to a natural, traceable and non-animal protein source for the aquaculture industry.

“Our oceans have reached their biological limit; we are no longer able to produce enough fish to feed animals as a source of protein as well as feed human beings.  It doesn’t make any sense economically and environmentally to use freshwater fish to feed farmed fish,” says Diana Orembe, Co-Founder of NovFeed.

On top of the destruction to the environment that happens during the production of the fishmeal, it is expensive, and farmers spend 70 per cent of their production costs on the pricey feed. 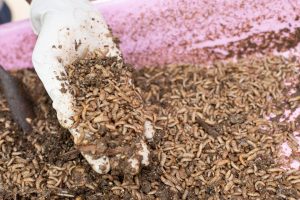 NovFeed has developed a biotechnological platform that relies on a fermentation process in which microorganisms produce a nutritious, high protein feed from organic waste. The process releases 80 per cent less carbon dioxide in the production process compared to traditional routes. The final product they make is free of toxins, is highly scalable and has high protein content and better nutrition.

Additionally, it is 30 per cent cheaper than traditional sources and is an organic microbial strain.

The feed is also better for the fish than the traditional fishmeal. Over a six-month period, fish fed on the NovFeed showed a growth rate of 40 per cent more than those raised on the feed in the market. 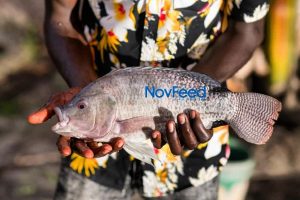 NovFeed then sells this protein for fishmeal to fish feed manufacturers who use it to make complete feed.

The company was established in 2020 and its mission since then has been to ensure that soybean and fishmeal protein isn’t used in the formulation of fish feed in the industry.

In the beginning, their efforts were met with resistance from the community because they did not understand why they wanted their organic waste. Some even wanted to charge them for collecting their waste, never mind that they pay their municipality to pick their garbage while NovFeed were collecting it for free.

“So, we resorted to educating them because waste in dumpsites is a huge issue. They were not aware of the effects and consequences to the environment,” says Diana.

As they collect the waste, NovFeed also educates the public about climate change and its effect.

“When you tell someone that this waste is producing greenhouse gases, they don’t see how it’s affecting them directly. It’s hard to understand because they are not aware and don’t have the knowledge about climate change, what causes it, why have weather patterns changed, and why doesn’t it rain like it used to. So, we looked for the simplest way to explain all this,” she says.

The remaining challenge was getting them to separate the organic waste from plastic, glass and other hard waste. So, NovFeed provided two garbage bins for the restaurants and marketplaces, one for soft waste and another for hard waste.

The start-up has achieved a tremendous impact on the climate and people of Tanzania so far.

But more than that, the company is proud to educate the community about the importance of recycling, climate change, and empowering them with the right attitude and knowledge to make informed decisions.

From just four co-founders, the team at NovFeed has grown; last year they hired two employees, they have two volunteers working for the company, six people who assist with waste segregation and a driver for the three-wheeled vehicle known locally as a tuk tuk, who delivers the organic waste to their site.

Looking to the future, Diana says NovFeed will continue to invest in Research and Development to discover other ingredients that will significantly reduce the cost of animal feed to farmers.